I’m sure we can all relate to the struggles of buying a luxurious new towel, but having the softness slowly wither away with each new wash. With just a few handy tips, you can keep your towels soft and fluffy even after plenty of washes.

Why do Towels Go Stiff?

Towels can feel hard due to build up of soap and detergent which causes a less absorbent layer on your towels. You may think that a lot of fabric softener and a hot wash will keep your towels fresh, but this can actually have the opposite effect.

These 6 tricks will help to make your shower routine a little more luxurious and ensure your towels are at the envy of all your guests! 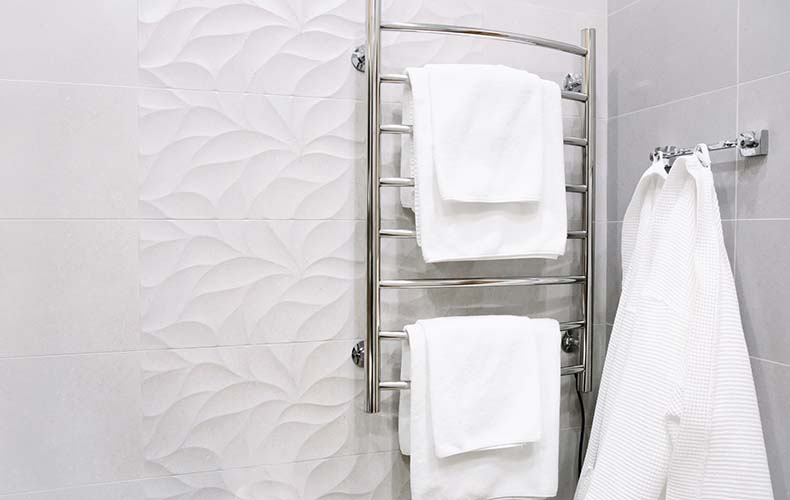 You may think that hotter temperatures are better for cleaning clothes, but towels are best washed in temperatures around 30-40 degrees. Warm water absorbs detergent better, in turn leaving less chemical child up on your towels, which makes them feel stiff. Although washing your towels on higher temperatures is the most efficient way to get rid of germs, 30 or 40 degrees will still eliminate most of your bacteria and preserve your towels fibres.

Putting too many towels in your washing machine at once won’t allow enough room to rinse out all the dirt and detergent. This is the general rule of thumb for all washing loads, including bed sheets, as the fabrics will need room to breathe. The optimum number is two or three bath towels at a time.

Fabric softener will coat the fibres of the towel and build up over time which causes towels to feel hard and become less absorbent. Soften with towels in a load of just vinegar once every few weeks to remove the soapy residue that causes your towels to feel hard. One cup of white vinegar will be enough for this process.

Replace fabric softener with baking soda to loosen the fibres of your towel. Baking soda not only helps to brighten up your towels and keeping them soft, but it also keeps odours at bay. Half a cup of baking soda per load will do the trick, along with your normal detergent.

Too much harsh heat can damage the cotton of your towels, which can be another reason why they feel hard. Try a lower heat setting or a shorter cycle of the tumble dryer if you’re using one. Line washing is the most environmentally friendly way to dry towels, so if you're drying them this way, you should shake the towels once they’ve dried to fluff them up.

Storing towels side by side instead of in stacks will ensure that the bottom towels aren't crushed by the ones above. To prevent this from happening, you can store towels on heated towel rails.

You may need to repeat these steps a couple of times if your towels are especially crunchy, but with these top tips, you should be able to make use of what you have rather than splurging out on a whole new towel set!

Angled radiator valves are a standard radiator valve with a 90 degree bend. They are used to connect radiators to plumbing which exits the wall or below floorboards.